Our heroes at the Yes Lab strike again calling for renewable energy: 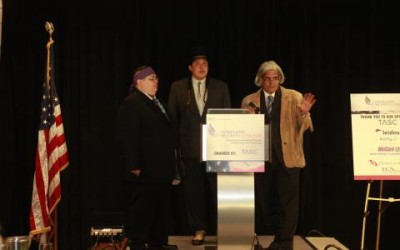 To a dance-ready crowd of security and defense contractors at the Homeland Security Congress in Washington, one “Benedict Waterman”—a crazy-haired, bespectacled official supposedly from the U.S. Department of Energy—announces a revolutionary new energy plan to convert the U.S. power grid to entirely renewable sources by the year 2030, and give ownership of the new power-generation facilities to those on whose land they’re built—from Native American nations (thus serving as reparations for genocide) to anyone who puts a solar panel on his or her roof. (See full press release here.)

The plan, “Waterman” announces, will give us independence from the fossil fuel companies who are leading us to ruin, and will additionally create millions of jobs, eventually save half a trillion per year on health care costs, result in lower energy costs and greater price stability, and—bonus!—give our civilization a chance of surviving well into the future. (One such plan is described in some detail here.) [read more]

Link to interview on the Democracy Now site