The Zoetrope
A zoetrope is a device consisting of a cylinder with holes, or slits, cut around the side of it enabling you to see through the sides. It is positioned on a stand so that it can spin. Inside the cyclinder is a strip of paper with images drawn on it, each of these images is like a cell in an animation so as the cyclinder spins and you look through the slits in the side it looks as though the images are moving. William George Horner, a British Mathematician , invented the zoetrope in 1834 although then it was known as the Daedalum which means “wheel of the devil”.

As generally acknowledged, cinema (a word derived from Cinematographe) was born on December 28, 1895, in Paris, France. The Lumieres presented the first commercial exhibition of a projected motion picture to a paying public in the world’s first movie theatre – in the Salon Indien, at the Grand Cafe on Paris’ Boulevard des Capucines. The 20-minute program of ten short films (with the mundane quality of home movies), with twenty showings a day. These factual shorts (or mini-documentaries), termed actualities, included the famous first comedy of a gardener with a watering hose (aka The Sprinkler Sprinkled, Waterer and Watered, or L’Arrouseur Arrose), the factory worker short (see above), a sequence of a horse-drawn carriage galloping toward the camera, and the arrival of a train at a station (Arrivee d’un train en gare a La Ciotat) read more.

More info from Personalities of the Silent Era website 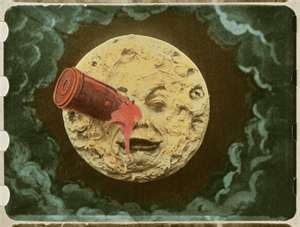 Méliés most well known film is Voyage dans la Lune, Le/A Trip to the Moon (France, 1902), the screen’s first science fiction story, was a 14 minute masterpiece (nearly one reel in length (about 825 feet)), The silent film’s plot, a light-hearted satire criticizing the conservative scientific community of its time, was inspired by Jules Verne’s From the Earth to the Moon (1865) and H. G. Wells’ First Men in the Moon (1901).

Watch Trip to the Moon but *mute sound/narration*
Trip to the Moon was digitally restored to its original color in 2011. Click here to read about restoration and a view a slideshow. For links about Melies and the film Hugo which was loosely based on his life, click here.