**I am updating this post from 9.20.10 after seeing the John Baldessari retrospective at the MET, Pure Beauty

[Seeing Baldessari’s early work was eye-opening for me. He was so open and experimental and truly pushing boundaries. One or two experiments were all that was needed to explore an idea. It was very anti-art market. The work from the late 1980s on which is what I was most familiar with was smart but it is stylistic and included many variations on a theme with large production value – so that is what we see in museums and collectors collect. It is understandable but it saddened  me.]

from the Tate channel, a co-organizer of the retrospective with Los Angeles County Museum of Art

*(tate.org.uk is a great resource for artist information)

Making his name as a pioneer of conceptual art in the 1960s with his text and image paintings, Baldessari shocked the art world when he announced in a newspaper that he was cremating all the artworks he had produced between 1953 and 1966. He then turned his attention to photographic works often incorporating found film stills, trawling dumpsters for discarded material from which he created his famous photo-compositions.

Baldessari’s lifelong interest in language, both written and visual, has been at the forefront of both his artwork and his teaching, through which, over more than thirty years, he has nurtured and influenced succeeding generations of artists. His work has had a huge influence on Cindy Sherman, David Salle, and Barbara Kruger among others. His works incorporate wit and irony, both mocking conceptual art and delivering it in his written work I Will Not Make Any More Boring Art; superimposing media images and painting with his trademark dots and over-painted figures in The Duress Series; and exploring the idea of subliminal images in advertising in his sequence of ice cubes containing the words of his name, ‘U-BUY BAL DES SARI’. 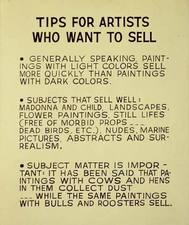