Ai Weiwei is the one of the most important and controversial artists working in China today. As I write this, his whereabouts unknown after being taken into custody by Chinese Authorities as he boarded a plane to go to Hong Kong on April 3. From a post on ARTINFO

[online petition organized by Guggenheim Museum calling for his release]

Who is Ai Weiwei? According to Chinese authorities, he is a dissident to be watched, one whose inflammatory blog needed to be silenced. But to others, the Chinese conceptual artist, architect, photographer, and curator — loathed and loved for his human rights activism — is the courageous voice needed in today’s repressive China. read more 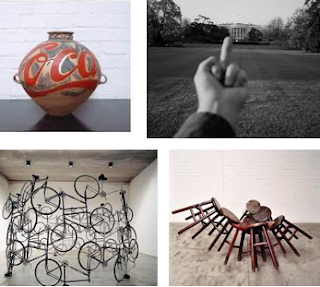 ***Must watch video interview in the Guardian on the eve of his show at the Tate Modern in March 2010. Video: Ai Weiwei – ‘Life is never guaranteed to be safe’

Tate Modern protest calls for release of missing Chinese dissident artist Ai Weiwei. Pictures of sunflower seeds bearing names of 50 of the detained or ‘disappeared’ laid on grass outside gallery.

more Links from the Guardian