[Reblogging] About Those Callous Selfies — by Michael Shaw, BagNews Notes 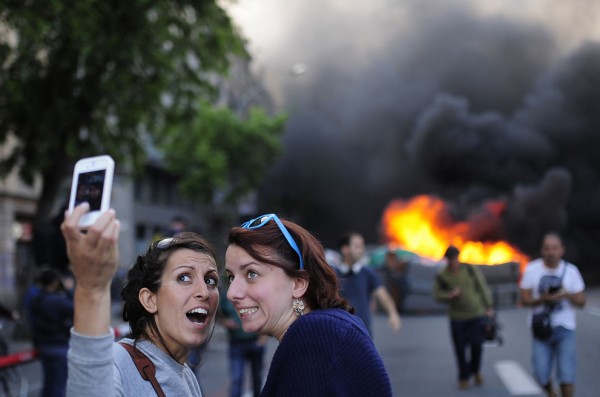 You’ve seen them before. You’ve seen them in war zones and funerals, even. More often than not, they result in disdain — or head scratching, at least —  for the apparent soullessness and narcissism. This is just the latest I’ve seen. It appeared, in all it’s blasphemy, as the leadoff photo in The Atlantic “In Focus” Photos of the Week slideshow on Friday.  Documenting the perceived insensitivity, the caption reads:

Tourists take a “selfie” as demonstrators burn a trash container during a May Day rally in Barcelona, Spain, on May 1, 2014. Tens of thousands of workers marked May Day in European cities with a mix of anger and gloom over austerity measures imposed by leaders trying to contain the eurozone’s intractable debt crisis.

How dare these tourists (ugly Americans, perhaps?) denigrate the anger and gloom of tens of thousands of European workers?

Well, I’m not prepared to say that this photo or its innumerable cousins have any moral implications at all.  What is clear is that these types of photos need to be understood on two completely independent levels. [read rest of article]